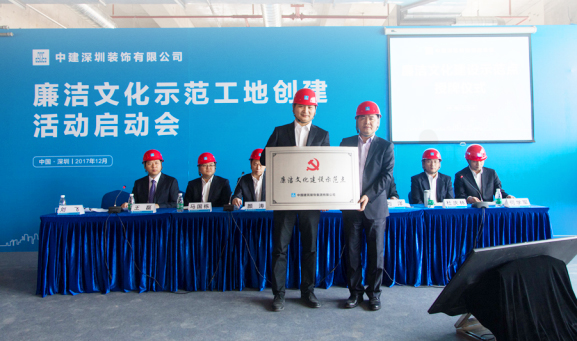 Before the kick-off meeting, the participants visited the project site and listened to the introduction of the project on the model layer. The visitors were full of praise for the construction quality and visual effect of the site. Afterwards, we visited the publicity Gallery of CCDC's incorruptible culture. The gallery focused on the work of CCDC's "five incorruptible culture" in recent years and the original incorruptible cultural works of its employees. The rich and colorful incorruptible cultural construction activities made the participants constantly nod and praise. After the visit, the launching ceremony of the clean culture demonstration site of CSCEC Shenzhen decoration Nankai project was officially held.
Liu Yang first delivered a welcome speech. He said that, all along, under the leadership and help of the group and CSCEC, CSCEC Shenzhen decoration Guangdong branch has achieved the same frequency resonance and common development of clean culture construction, production and operation, Party construction and corporate culture construction. He said that in the future work, CSCEC Shenzhen decoration Guangdong branch will, as always, implement the deployment and requirements of the group and CSCEC Shenzhen decoration on the construction of party conduct and clean government and anti-corruption work. Not only in the Nankai project, but also in all projects of CSCEC Shenzhen decoration Guangdong Branch, it will vigorously carry out the construction of clean culture, publicize and implement the spirit of "winning the overwhelming victory in the anti-corruption struggle" of the 19th National Congress of the CPC, Contribute to build a clean deep. Subsequently, Cheng Zhiyong announced the official launch of "the activity of establishing the super British clean culture demonstration site of CSCEC Shenzhen decoration Nankai project", and awarded the project manager the name plate of the demonstration site. At the same time, the super British commando team was established and the Party style and clean government supervisors were hired. During this period, all the participants watched the introduction video of CSCEC's discipline inspection and supervision work.
At the end of the meeting, Cheng Zhiyong delivered an important speech. He pointed out that at the just concluded 19th National Congress of the Communist Party of China, in view of the problem of anti-corruption, the Party Central Committee insisted on "no forbidden zone, full coverage, zero tolerance", and at the same time clearly put forward "heavy containment, strong pressure, long deterrence", which showed our party's firm determination to continue to fight corruption. Therefore, the grassroots of the project should strengthen learning and actively understand the spirit of the 19th CPC National Congress. In addition, he put forward four requirements for the staff of CSCEC Shenzhen decoration Guangdong Branch: first, continuously strengthen the party spirit cultivation and firmly establish the public servant consciousness of serving for the project; second, correct the professional ethics and enhance the moral concept; third, the leading group should set an example to fight corruption; fourth, the majority of staff should consciously accept supervision and maintain the nature of hard struggle.
All along, CSCEC has always adhered to the principle of comprehensive and strict governance of the party, the correct leadership of the group, and the construction of a clean and Honest Party style, which has achieved good results. Imbued with the warm atmosphere of the clean culture demonstration site activities, the participants expressed that they would earnestly implement the requirements of the higher authorities, take the "super British spirit" as the carrier, and achieve the goal of "excellent engineering quality cadres" in the grass-roots project department, so as to make contributions to the building of clean and deep decoration.

Scan the QR code to read on your phone

Homepage
About us
News
Party